We got up extra early one morning during our trip to the Big Island to drive out to Honaunau to (attempt to) swim with the dolphins. Nothing was open at the crack of dawn for breakfast except for the 24-hour McDonald’s in Kealakekua. Eating McDonald’s in Hawaii when we could be eating Loco Moco or Hawaiian sweet bread? We’ve got to be crazy right? Hey, we were starving and everything else was closed…

Really tasty Egg McMuffins with softer and fresher English muffins than back home. Only one slight problem – they forgot the egg in Gary’s Sausage & Egg McMuffin. We mentioned the error, but they made us go through a second transaction to pay for another egg. It was only a dollar, but other McDonald’s would have just remedied the situation instead of making a fuss, considering it was their mistake! Come on McDick’s…

Ahh, the glorious McD’s hashbrown was so hot and crispy and again, far superior than McDonald’s hashbrowns back home. How come Canada can’t serve delicious fast food like its American neighbor?

Apple pies in Canada are “baked”, but this one was extra crunchy and straight out of the deep-frier! Speaking of pies, McDonald’s Hawaii serves limited-time pie flavors along with other unique-to-Hawaii menu items: Haupia Pie – Has the same outer crust and shape as McDonald’s classic apple pie, but this version contains haupia, a traditional Hawaiian creamy coconut pudding dessert. See photo here. 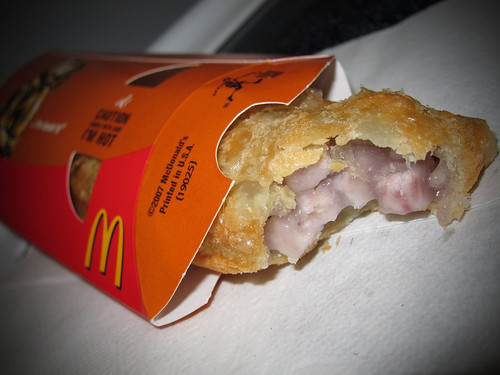 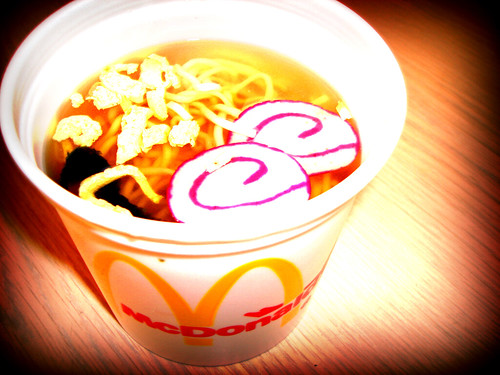 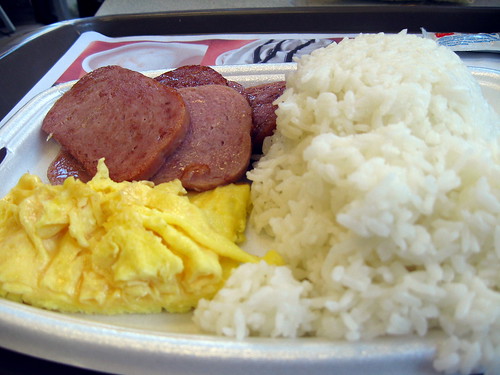 Local Breakfast Platter – Offered as a regular platter with a choice of either Spam or Portuguese Sausage served with steamed white rice and scrambled eggs. Or, you can go all out and order the “deluxe” platter with both meats, pictured above. You can even add-on some Pineapple – Fresh pineapple chunks are offered as a side-dish at the busier McDonald’s Hawaii locations.

You’ve got to give it up for McDonald’s because they’re always trying to introduce local dishes on their menus around the world – we enjoyed the McArabia in Dubai and Ebi Filet-O in Japan! What’s your favorite regional McDonald’s item?

This husband and wife team search for the best dining experiences - including restaurant launches, new menu tastings and culinary events. Learn more about the couple here and connect with them on Twitter and Facebook.
View all posts by Taya & Gary →

Subscribe to our RSS feed and social media streams to receive updates.